skip to main | skip to sidebar

Posted by St. Anthony School Library at 4:53 PM No comments: 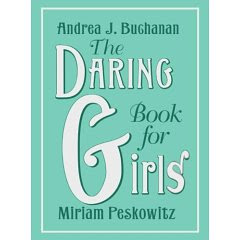 Watch the video ad for this book. Click here! Then check it out and find some fun things to do.
Posted by St. Anthony School Library at 9:09 PM No comments: 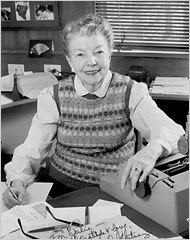 One of the most famous children's authors, Phyllis A. Whitney, died on February 8th. She was known as "the queen of American Gothics." Local columnist and "mystery" expert, Oline Cogdill, wrote about her in the Sun-Sentinel.com. If you would like to read one of her books, we have two in the SAS library that also qualify as Accelerated Reader books--The Secret of the Samurai Sword and The Secret of the Tiger's Eye. The books are appropriate for students in 7th and 8th grades.

Secret of the Samurai Sword
Whitney, Phyllis A.
Quiz No. 9892 EN Fiction
Info IL: UG - BL: 6.1 - AR Pts: 9.0
When Celia and Stephen go to visit their grandmother in Japan, they discover the ghost of an old samurai that haunts her garden.

The Dangerous Book for Boys 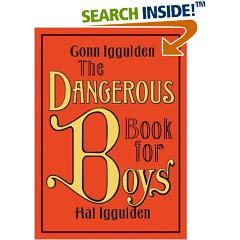 From School Library Journal
Grade 4-8–Intentionally old-fashioned and politically incorrect, this eclectic collection addresses the undeniable boy-appeal of certain facts and activities. Dozens of short chapters, in fairly random order, cover a wide range of topics in conversational prose. Simple instructions for coin tricks and paper airplanes alternate with excerpts from history such as Famous Battles and facts about ancient wonders of the world and astronomy. The dangerous aspect is more apparent in such chapters as Making Cloth Fireproof, and Hunting and Cooking a Rabbit, but also applies to the overall premise that action is fun and can be worth the risks. A section on stickball, for instance, includes advice to possibly flee the vicinity in the event of a broken window. The information is appropriately concise. The knot-tying section, for example, sticks to five basic varieties with clear instructions and useful diagrams. Occasional topics such as Marbling Paper and Latin Phrases Every Boy Should Know may not fit the stereotypical interests of young males, but support the general theme of cultivating curiosity. The authors refer to their own experiences as they tested the activities, lending an appealing personal tone. Tongue-in-cheek humor emerges throughout, notably in eight bits of advice offered in the chapter called Girls. Already a best seller in England, this American edition features several adjustments, such as substituting The Declaration of Independence for Patron Saints of Britain. Both premise and content should appeal to many boys, and might be even more successful when nostalgic dads join in.–Steven Engelfried, Multnomah County Library, OR
Copyright © Reed Business Information, a division of Reed Elsevier Inc. All rights reserved.
Posted by St. Anthony School Library at 10:44 AM No comments:

to read more books? ...to read a new kind of book? ...to discuss what I read with my friends?

If you are still working on your New Year's resolutions make one that involves reading. Kick your reading up a notch. It's fun!
Posted by St. Anthony School Library at 11:48 AM No comments:

From the NY Times: a review

In From the Cold

A little girl makes away with precious cargo in “Angela and the Baby Jesus,” by Frank McCourt.


ANGELA AND THE BABY JESUS

In terms of plain narrative, the Nativity story is hard to beat. It has pretty much everything: a journey, a baby, a mass murderer, refugees, the kindness of strangers, music, animals and big, big special effects. Picture-book artists have presented this story with originality and brio, from Dick Bruna and his squat, minimalist Holy Family to Julie Vivas and her realistically weary Mary.

Why is it, then, that so many picture books on the more general or secular themes of Christmas lack fiber? There is nothing remotely sappy in the original story, but legions of books featuring little angels and animals at the manger or anthropomorphized Christmas trees and indefatigable drummer boys fall flat. Perhaps Christmas simply provides too much material. The secular accretions of Santa Claus, figgy pudding and Suzy Snowflake are enough to make you look for inspiration in some less excessively explored holiday. Groundhog Day starts to look good.

One way around this problem is to focus on something elemental. Frank McCourt’s “Angela and the Baby Jesus” is built around the theme of cold. This family anecdote involves McCourt’s mother as a 6-year-old deciding that the infant Jesus figurine in the Christmas crib at church must be cold in his scant loincloth, then stealing him to take home to her warm bed.

Readers of McCourt’s 1996 memoir, “Angela’s Ashes,” will remember his rare gift for entering the minds of young children. He captures the way they construct complicated plans and notions based on basic misunderstandings. He never lets his adult perception of their vulnerability get in the way of the pleasure he takes in children’s complexity and sturdiness. In this small story he lets us know that Angela’s kind impulse is laced with naughtiness, sibling rivalry, attention-getting and a desire to escape the position of smallest in the family. Angela is endearing, but she is not cute.

The heist itself, which involves hiding in the confession booth and throwing Jesus over a backyard wall, is masterly and lively. The only hitch in the proceedings concerns Angela’s older brother Pat, who “was like a baby himself and often said foolish things even she wouldn’t say.” When Pat discovers Angela’s secret, he announces the truth to the family: “She have God in the bed, so she do.” But of course they don’t initially believe him. In this, Act 2 of the drama, the emotional heart of the story switches to Pat and his relationship with Angela. In Act 3, both strands, now tightly woven, come to a neat, unexpected, satisfying conclusion.

The lilting cadence of McCourt’s prose — “Was it having a bit of a rest you were?” “’Twas” — is matched by Raúl Colón’s watercolor-and-pencil illustrations, in a limited palette of blue and ochre. We move up and down stairs and streets, but we seldom stray from Angela’s viewpoint. The moonlit road home from the church is so long as to seem never-ending, the backyard wall is high as high, and when the twin forces of church and state confront Angela, the priest and the policeman are so tall that the tops of their heads are cut off the page. A message McCourt never makes explicit lies in the composition of the family scenes, the rounded sculptural figures echoing the solidity, formality and closeness of the manger crib.

Anticipating a crossover market, the publisher has also issued a smaller-format “adult” edition of “Angela and the Baby Jesus,” with illustrations by Loren Long (Scribner, $14.95). The tale is a natural for a seasonal family read-aloud (McCourt opens for Dylan Thomas), but the Long illustrations are dark and dreary, so you might as well stick with the picture-book version. 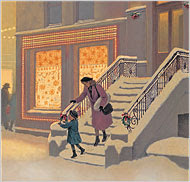 Illustrated by Bagram Ibatoulline. Unpaged. Candlewick Press. $16.99. (Ages 4 to 8)
Frances, who appears to be 8 or 9, looks out her apartment window to the street below to see an organ grinder and his monkey. She discovers that they sleep on the street and, concerned for them, invites them to her church’s Christmas pageant. During the play, Frances, who has the role of the angel who appears to the shepherds, chokes on her lines; but at the critical moment, when musician and monkey enter the church, she recovers, and the angelic announcement is made.

Memorable picture-book texts often emerge when two stories entwine. In “Angela” the story of Pat winds around the story of the liberation of the baby Jesus, giving it strength and universality. It is Ireland in the 1910s, and it is all other times as well. In “Great Joy” the two strands of the plot — pageant and organ grinder — don’t convincingly mesh, and neither has enough substance or originality on its own. To invite a homeless person to come in from the cold for a couple of hours is not a sturdy enough premise to justify the emotion the narrative seems to be asking of us.

This blandness and sentimentality is mitigated somewhat by Bagram Ibatoulline’s illustrations. His paintings, in acrylic gouache, portray people with very particular faces, and their gestures are meaningful and familiar. Frances stops to gather new-fallen snow on her way to church. Her mother steps gingerly on the slippery steps. He adds back-story details — a framed photograph of a man in uniform suggests a father away at war. And the concept of joy, which is not convincingly realized in the text, is made manifest in a personality-filled double-page spread that follows the final words. Ibatoulline depicts the church social after the pageant. One shepherd picks his nose, the camel (front end) emerges from his costume, the monkey sits on Frances’ shoulder and investigates her hair, and the organ grinder, illuminated by Old World charm, flirts with Frances’ mother.

Christmas books wear their messages on their sleeves. They can’t help it. We allow them an extra measure of sweetness. But the demands of storytelling still apply, even in the season of marzipan. Fully realized characters, nongeneric places and voices, an acknowledgment that virtue is complicated — these are what make the message palatable and create a space for yet one more Christmas tale.

Sarah Ellis is a writer and teacher in Vancouver. Her latest book is “Odd Man Out.”
Posted by St. Anthony School Library at 11:32 AM No comments:

It's that time of year again--Thanksgiving! You should check out the Thanksgiving-related books in our library: books about the Pilgrims, Squanto, the Mayflower, and those cold hard days in the New World. And now...you can find one in your AR reading range, too. Like this.... 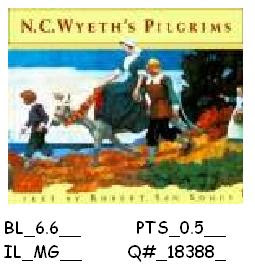 Posted by St. Anthony School Library at 6:16 PM No comments:

The American Library Association has put together a wonderful list of websites for kids: CLICK HERE to visit their page.

Find out more about all these topics.

Labels: ALA, websites for kids 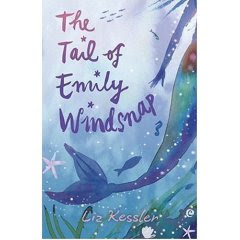 If you've been waiting for the novel, The Tail of Emily Windsnap, then you will be pleased to know it has arrived. We have the sequel, too. Check it out!
Posted by St. Anthony School Library at 10:17 PM No comments:

These are a few of the magazines available in our SAS Library. 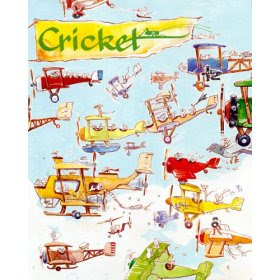 Cricket feeds the minds and imaginations of reader's ages 9 to 14. Every issue of Cricket is filled with stories, poems, puzzles, recipes, and science and nature articles-all designed to stimulate the imagination and help young people to discover and explore the world around them. 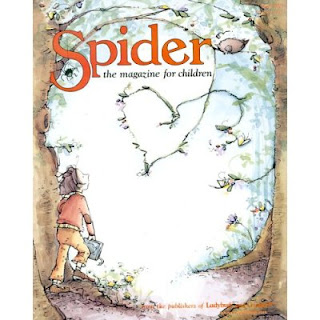 Spider weaves a web of wonder for kids ages 6 to 9. Spider is a fun magazine for independent young learners. It's especially written and edited for children who have reached that amazing age when they first get excited about reading on their own. Spider has short stories, poems, activities and games for children between the ages of six and nine. 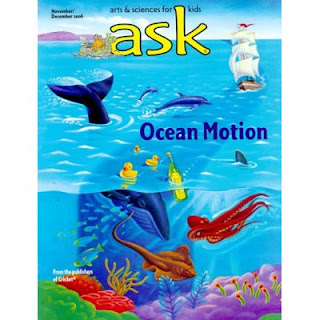 Ask investigates the world with past and present inventors, artists, and thinkers, and scientists. From the publishers of Click, Ask offers cartoons, contests, projects, Web experiments, games, and puzzles for kids ages 7 to 10 (grades 2 - 4).

Ask helps kids understand how the world works and how discoveries are made. 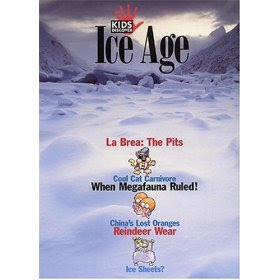